Nairobi is the capital city of Kenya in East Africa and was the first stop on our 3 week trip to Africa over Christmas in 2018.

It is not easy getting from New Zealand to Kenya. It took 3 flights and 28 hours of travel to arrive into Nairobi. We flew Thai and Ethiopian Airways to get there as it was the cheapest and quickest way. We also flew on the now banned 737 MAX plane between Addis Ababa and Nairobi which in hindsight was perhaps not the best decision…

Nairobi airport was reasonably quiet on the morning we arrived. There was the expected queuing to get through customs but as we had already applied for our visas it was easy to enter into the country. For more information on the visa process check out our Preparing for Tanzania post.

Our prior research highlighted that it is best to arrange a local taxi from inside the terminal. There is a small yellow stand just before you exit the airport. Here we were greeted by 2 friendly staff members who organised a taxi for us. The prices are all fixed and your local destination is likely in their price book.

However, the taxi we took was a heap of shit and not a car you would expect to see on NZ roads. It was a dusty journey into town, but our driver was reasonably friendly and got us correctly to our destination.

On our way to Nairobi

A man sells a xmas tree from the roadside

Once we arrived at the hotel, we showered and decided to go an explore the city. In typical Escapingduo travel fashion, we decided to walk… At first, we were a bit nervous, there is a high level of homeless people and a massive lack of footpaths in Nairobi. At times it felt dangerous but after an hour or so we felt more comfortable.

We decided to walk to the National Museum of Kenya. I had read some information online and it looked pretty interesting. We had lunch at the museum and managed to easily order some vegetarian food which was a good start. After lunch, we entered the museum. It was ok, not the most exciting place, but there were lots of taxidermy animals and some skulls of early humans (Homo erects) which were interesting. There was also a very sad looking snake park that we walked through at speed.

After the museum, we walked back to the hotel via the CBD. We found a cash machine which accepted our credit card and got some local currency for our time in Kenya. We also found a local supermarket for some snacks which is always a fascinating travel experience. Ali found chocolate and salt and vinegar chips so he was happy.

Due to jetlag we skipped dinner and went straight to sleep.

Our taxi driver from the airport offered to be our private driver for today. His asking price was $100 USD which in hindsight was pretty expensive but hey it was Christmas and as we had limited time in Nairobi having private transport allowed us to see lots of places. Despite him asking we deiced not to tip the drive anything additional at the end as we believed $100 USD was more than fair.

However, if I was to do it again I would avoid this option as he took us to some shit places and was organising guides for us that we didn’t want. Uber is commonly used in Nairobi so could have been a better option if we had data on our phones.

Here are the highlights from our day tour;

The David Sheldrick Elephant & Rhino Orphanage was our first stop on our day tour and is the number one thing to do in Nairobi according to Trip Adviser. It is located in the Nairobi National Park and offers visitors close encounters with baby elephants and more recently baby rhinos.

The Centre is only open for an hour a day from 11am, so we had to plan our day around this visit so we didn’t miss out.

We managed to arrive early so got a good spot at the fence before the babies came out. There were a lot of people there so expect lots of pushing and shoving as people try and get the best selfies with the elephants.

The babies were very cute though and it was such a joy to see them playing and showing off for the visitors. They do stink and like to fart into the crowd though so be warned! 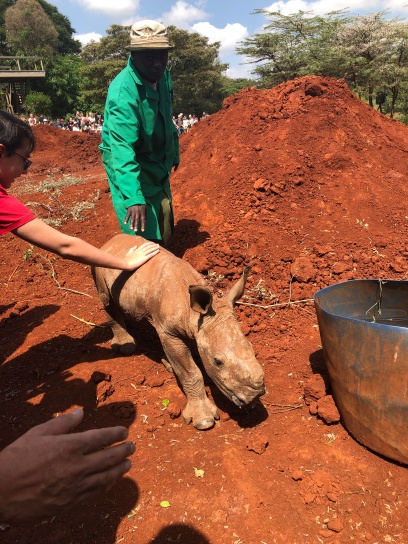 This baby rhino was only 1 month olf

The Giraffe Centre is right next door to the famous Giraffe Manor, if only we were rich it would have been awesome to stay there. However, the Giraffe Centre was also great. We had a good coffee at the cafe and managed to feed the Giraffes little pellets. Again there were lots of visitors so getting some alone time with a Giraffe was impossible but we waited our turn and had a great experience with them.

The souvenir shop here was also quite nice. Lots of Giraffe items to buy and all of the items had pricing so you didn’t have to haggle like other souvenir places.

The Bomas of Kenya is sort of a museum but there was also a cultural show that we could enjoy. The main attraction here are the replicas of traditional tribal buildings and housing. It was fascinating walking around the mud huts. Many of the villages are arranged in accordance with the number of wife’s a man might have. I am glad to be wife number 1.

The cultural show in the large atrium showcased the various tribes dancing and music. It was nice to watch but after about the 5th tribe we were tired and were ready to head back to the hotel.

We also had lunch here which also seemed popular with locals. As vegetarians, there were not a lot of options on the menu but we managed to get some good cheese sandwiches and a nice cold local beer.

Our driver took us to this terrible crocodile farm (Nairobi Mamba Village) it seemed popular with locals but the condition the animals were kept in looked cruel and dirty and made me feel uncomfortable.

Our driver also took us to a souvenir shop, you can buy the same items at any store in Kenya or Tanzania for that matter so it was nothing special. We aren’t big souvenir buyers so I the place did nothing for us. We also suspected our drive was not so pleased that we didn’t buy anything.

After a big day exploring Nairobi, we rested back at the hotel which had a nice swimming pool. At 6pm we were meeting up with the rest of our tour to star our Road to Zanzibar.

We had to come prepared for this meeting with all our vaccination and travel insurance information, a must for any traveller in Africa. We were briefed on the journey to come which was exciting and got to meet our fellow travellers. 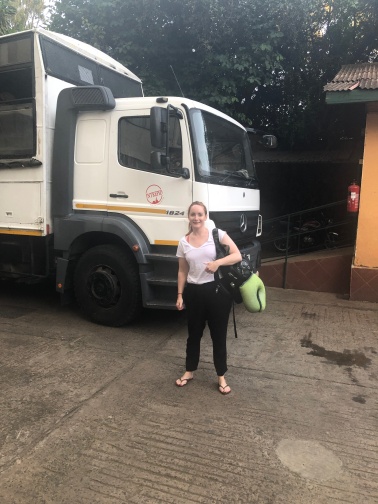 The cost of things in Nairobi are not too different from costs in New Zealand. It is a large city after all. Be prepared to also pay in a mix of USD and Kenyan Shillings

Baboons on the side of the road

We believe we saw all the highlights Nairobi has to offer tourists so we won’t be rushing back to Nairobi. However, it is a useful base to enter into East Africa and to start some of the popular Intrepid Travel trips or other tours.

We were glad we had the up close and personal experiences with the animals but in hindsight, it was nothing compared to seeing them in the wild.

I love to travel the world and have exciting new experiences. I grew up in a small town in New Zealand and was inspired to travel by my parents. I remember reading their travel journal as a child and wanting the adventure for myself. After losing my mum in 2009 I realised life is too short to wait for opportunities. So in 2010 aged 22 I took on my first solo backpacking trip through Europe. I have since been to 41 countries across Europe, Asia, North, Central, South America, Africa and Oceania. View all posts by Katie Blackburn